A summer break for Matt Wunderle?

Wunderle earned the prestigious opportunity after being selected as Ohio’s representative in April 2021.

To explain how distinguished the honor is, only one teacher per state is selected.

“I was incredibly honored,” Wunderle said.

The United States Congress established the James Madison Memorial Foundation in 1986 with the intention of being a champion and to grow civid education.

As part of the award, the remainder of Wunderle’s Master’s Degree will be funded by the program, which Wunderle reported he is just three classes away from earning the degree from Ashland University.

Additionally, Wunderle received the opportunity to spend a month in Washington D.C. as part of the James Madison Summer Institute.

He spent June 11 through July 8 immersed in American history. 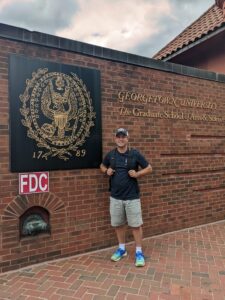 Ravenna High School teacher and boys soccer coach Matt Wunderle was one of only 50 selected as a James Madison Fellow in April 2021.

“It was an incredible opportunity. In many ways, the chance was an opportunity in a lifetime and it was life changing, to be honest,” Wunderle said. “To spend a full month in that kind of environment allowed me, and all of us, to lose ourselves in the study.”

Wunderle said each day was outlined by an intinerary for a new adventure.

Breakfast would give way to a 2-hour lecture, which was followed by a discussion.

Lunch would segway into another lecture — provided by top-level scholars from around the country — and then the group would move into an outing.

Wunderle enthusiastically listed off trips to the Supreme Court’s conference room, Capitol Building, Library of Congress, Mount Vernon, Gunston Hall and the city of Philadelphia, where they went to Independence Hall, Constitution Hall, Liberty Bell, and the Museum of American Revolution.

Wunderle listed the American Revolution museum as the one that “was most special to me.”

“The entire experience, every single day, was just incredible,” Wunderle said. “Of course, it was really tough to be away from my family for that long, but they were very understanding and supportive. 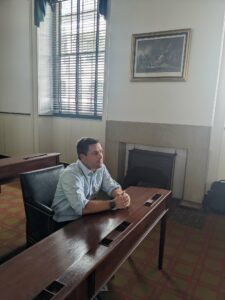 As part of his reward for being selected as a James Madison Fellow, Ravenna teacher and boys soccer coach Matt Wunderle spent June 8 through July 11 in Washington D.C. studying American History as part of a prestigious program.

“Even when we were not in a lecture or a scheduled discussion, our group would talk about history,” Wunderle said. “We would be at our apartment, having a meal or playing corn hole, and a deep conversation about The Federalists Papers or Montesquieu would open up. It was enlightening.”

Wunderle, whose enthusiasm to teach could never be called into question, said he is now looking forward to the start of the school year even more than usual.

“I am excited. The experience has allowed me to develop a deep well of knowledge for my students, and I can’t wait to share it with them,” he said. “Documents or ideas that I was once teaching based on a secondary source, I have now been able to visit and study it as a primary source with a better and deeper understanding.”

Upon his return back home to Ravenna, Wunderle had purposely blacked out his first week back so that he could catch up and spend needed quality time with his family.

Then it was time to kick into gear for the Ravens’ soccer program.

Reviving a tradition that had been paused the last two summers because of COVID, Wunderle re-introduced the team’s summer team trip. 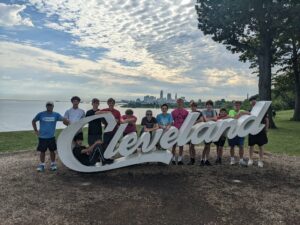 Once Matt Wunderle returned home from his James Madison Fellowship Program, it was time to jumpstart the Ravens’ boys soccer season with a team trip to Cleveland.

In addition to university visits, Wunderle set up a scrimmage with Cleveland Benedictine, a fun day at an escape room and also a Team Olympic competition at Edgewater Park Beach that included swimming, soccer horseshoes, soccer tennis, ultimate frisbee and more.

“The boys had such a great time, and I know they went home exhausted,” Wunderle said. “We really tried to squeeze as much into those three days as we could to make the trip all it could be.”