Lee Horning lives for compassionate service for his Vikings

Lee Horning lives for compassionate service for his Vikings 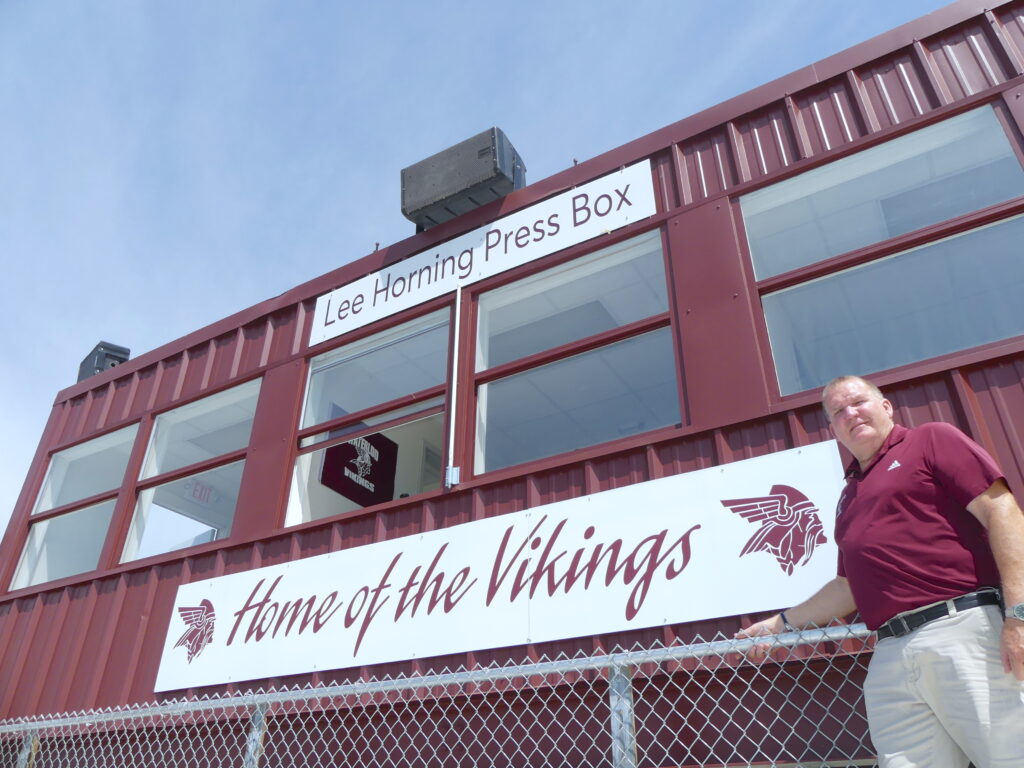 It has been 45 years since Lee Horning graduated from Waterloo High School, but there is not a day that goes by that he is not thinking about the school.

And how all those things can come together to make the day better for everyone around him.

That is the life of Lee Horning.

A forever selfless server who remains one of Waterloo’s most committed, dedicated and loving volunteer.

Technically, Horning holds the title of volunteer site coordinator, but athletic director Mike Devies is quick to recognize that there is an endless list of duties Horning does around the district’s campus on a continuous basis and for free.

After all these years, Horning is able to explain why quite simply.

Horning grew up on Eberly Road in Randolph and graduated from Waterloo in 1977 and was the first four-year football letterman in school history. He is also still the only quarterback in program history to earn two wins against Mogadore. 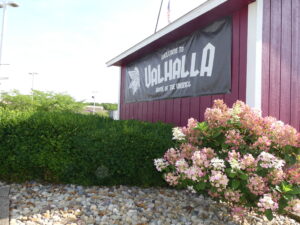 As part of the revitalization of Waterloo’s football stadium, title sponsor Hamrick Manufacturing’s President Jordan Hamrick helped add some heritage to the venue with the name VALHALLA.
Valahalla is the Norse equivalent for Heaven, which is written on every yearbook Waterloo has ever printed.
Tom Nader/Portage Sports

It is a badge of honor for Horning, who does not use it to boast or validate his athletic abilities, but rather for the school’s pride, considering the Vikings own just five wins over the Wildcats in 49 career meetings.

It also fulfilled a bit of destiny when looking back to his eighth-grade year on the gridiron.

“I went to St. Joe’s through eighth grade, and I snuck over to Waterloo Middle School to sign up for the football team,” Horning said. “I am not sure if that was against any rules or not, but all I knew was that I really wanted to play football. Chuck Conley was our coach, and I remember him saying to some of the other coaches, ‘That’s the next Waterloo quarterback’.”

Condley, who retired from Waterloo after 35 years as a special-education teacher, quickly recognize something in Horning, who also golfed for one year at Waterloo and also played four years of basketball under successful coach Fred Brookover (winning titles in 1976 and 1977).

Horning’s success on the field and court as a student-athlete are fun stories for him to revisit, but not to gloat, but to stitch piece after piece of Horning’s Burgundy and White story.

So much so that it is hard to think of Waterloo and not also immediately think of Horning.

You simply cannot attend a Waterloo football, basketball or soccer game and not see Horning buzzing around.

He handles pregame setups, meeting with officials, announcing, bookkeeping, ticket booth coordination and even making sure the football team’s inflatable helmet is blown up.

He tests the speakers, ensures the yard-markers are in place, meets and greets the opposing team. 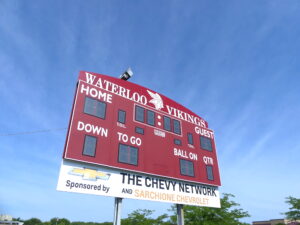 All updates and renovations made at Waterloo’s football stadium were donated or privately funded. No school funds have been used toward the impressive project.
Tom Nader/Portage Sports

His pride for the school and community pushes him to make sure that every event is presented with as much professionalism, care and sportsmanship as possible.

In total, Horning has kept the scorebook for basketball for 25 years and has been the school’s primary coordinator for soccer and football for the last 18 years.

And even more time when calculating that he has served as an officer in some capacity on the Waterloo Athletics Booster Club for the last 31 years.

“I still love what I do, and I still love the kids,” Horning said. “Just this morning, when I was walking through the halls, there were band members and soccer players that greeted me with enthusiastic, ‘Hellos,’ and, ‘Hi, Mr. Horning!’ I am not trying to be dramatic, but that kind of stuff almost gets me emotional.”

For home football games, Horning said he arrives to the field around 2 p.m. to begin the night’s setup. By the time he helps close up the stadium and turns out the lights, it is 11 p.m., which is after he has worked an 8-hour day at Clem Excavating.

“Lee is just always around, and I have to be honest, I don’t know what I would do without him,” said Devies, who was first introduced to Horning in 2014 when joined the track and field coaching staff before being named the football coach in 2015. “What he does for this school and what he does for our athletic programs, I am not sure how you could ever begin to measure it.

“I grew up around firemen, policemen and psychologists. Selfless service was a big part of my upbringing and then I get to Waterloo and work with Lee, and he is the epitome of selfless service,” Devies added.

As part of the district’s completely privately funded renovations to the football stadium, the stadium committee honored Horning by naming the press box in his name.

It was kept a surprise until Dedication Night last Sept. 24 during the Vikings’ home matchup against Lowellville. 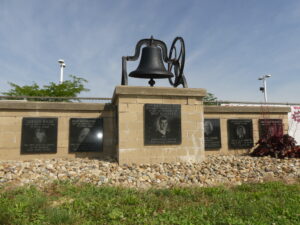 “I had rented a P.A. system from Woodsy’s in Kent for the night for the rest of the dedication that night,” Horning said. “Just before the game was about to start, Mike (Devies) was signaling for me to come to half field because there was something wrong with the microphone; that it was not working right. I started walking out, truly thinking about how I was going to try to fix this problem.

“As I got closer to midfield, I realized that something must going on. My whole family was there and a lot of ex-players, it ended up being 41 ex-players,” said Horning, whose family include his wife of 42 years Terri (Martz), son Brandon (38 and employed by Harner Plumbing) and daughter Jessica (35 and is an assistant principal at Windham).

“I stood there and they pulled the banner off the press box to show my name on it, and I got really emotional. I really don’t feel like I deserve something like that. I don’t do what I do for the recognition. Ever. I do it for the kids. Always. I am very, very thankful to the stadium committee for even thinking of me for something like that. What they have done for this school with this project is simply amazing.”

Devies handed the microphone over to Horning, the same mic that had no issues from the start, and Horning said he remembers giving a short, but appreciative speech because he was so choked up.

“I remember realizing it was 5 minutes until kickoff, so I knew I still had a lot of work to do,” Horning said.

But Horning was not the only one caught up in the emotion of the moment.

“There are not a whole lot of moments in your lifetime that you feel just absolute joy for someone else, but watching Lee walk across that field, I had tears well up in my eyes,” Devies siad. “I was choked up and it is a moment in my life I will never forget. I know he didn’t think he deserved all the extra attention, but I could not think of anyone more deserving.”

Because on that night, the roles were reversed.

Waterloo’s staff and its student-athletes put Horning on the same pedestal he always keeps them on.