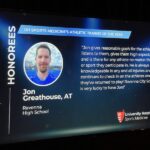 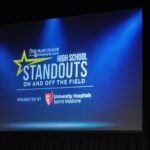 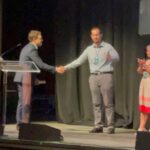 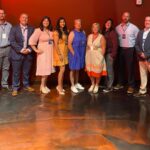 Jon Greathouse never expects to be the one on the stage.

He never wants to be the one that has the spotlight shining down on him.

That is where his student-athletes are supposed to be.

This summer, though, the roles were reversed.

The 16-year Ravenna High School athletic trainer was named Trainer of the Year as part of cleveland.com‘s High School Standouts On and Off the Field ceremony.

Greathouse was selected as the winner amongst a group of about 12 other nominees and admitted that he was suprised.

“I was shocked, to be honest,” he said, “but, obviously, very grateful for the recognition.”

One person not surprised was Ravenna athletic director Jim Lunardi, who has seen Greathouse’s professionalism and quality care for his entire career.

“Jon is a special person, and we are lucky to have him,” Lunardi said. “He comes to work with a great attitude every day and no matter what the situation is, he will go out of his way to make the live of the people around him better in a responsibile and timely way.

“He not only rehabs our athletes physically, but in a physchological way, too,” Lunardi added. “His approach is something I really admire and appreciate.”

Greathouse is a 2002 graduate of Tallmadge High School and earned his degree in athletic training from Kent State University in 2006.

That same year, he was hired by University Hospitals and began working with Ravenna High School and has been a Raven ever since.

“I love it here,” Greathouse said. “Ravenna is a great community and place to be. I connected really well with the city right from the start. I am a very loyal person, but it comes down to the fact that I want to see the athletes and coaches I work with have success and progress their lives. That is fun for me to see. If I only stayed somewhere a year or two, I wouldn’t get to see all of that happen for them. I enjoy work every day, and I enjoy the people I work with every day.”

Greathouse explained, though, that earning an award as recognition for his efforts is certainly not something he anticipated.

“Athletic trainers work behind the scenes. We work a lot of hours, and we do it without any recognition. We definitely don’t seek recognition. All of that is fine with us. We are OK with that. To be recognized and approved amongst your peers is very gratifying, but we don’t get into athletic training for awards. We do it because we like sports, and we like to help people.”

It is that kind of selfiess care that Lunardi has experienced on a daily basis for the last 16 years.

Even this past week, when a storm rolled through Ravenna, it was Greathouse who went out of his way to communicate to Lunardi that all of the student-athletes were safe.

“Just the other day, when that storm came in, Jon texted me to confirm that all of our student-athletes were off the fields and were safe,” said Lunardi, who also identified Greathouse as a mentor across Northeast Ohio for other athletic trainers. “Who does that? Maybe other athletic trainers do. I can’t speak for other districts. All I know is that Jon cares so much that he is doing that kind of extra stuff around our schools every single day. His attention to detail is incredible, and my trust with him goes without saying. I really think a lot of him and what he stands for.”

As for all the attention from his award, it challenged Greathouse to reflect on why he deserved the award in the first place.

His compassion, as expected, shifted the focus off him and onto others.

“For me, the award is more of an opportunity to represent all of the people in my life that have helped me get to where I am today. My family, the athletes, parents, coaches, administration, community members, people in the community that may the city work. They are the reason I am here. They have all made my life easier, and I feel this award is more about them than it is me.”

An admirable, and truly genuine, belief from Greathouse, who in his moment in the spotlight, found enough room in it to fit everyone else instead of just himself.