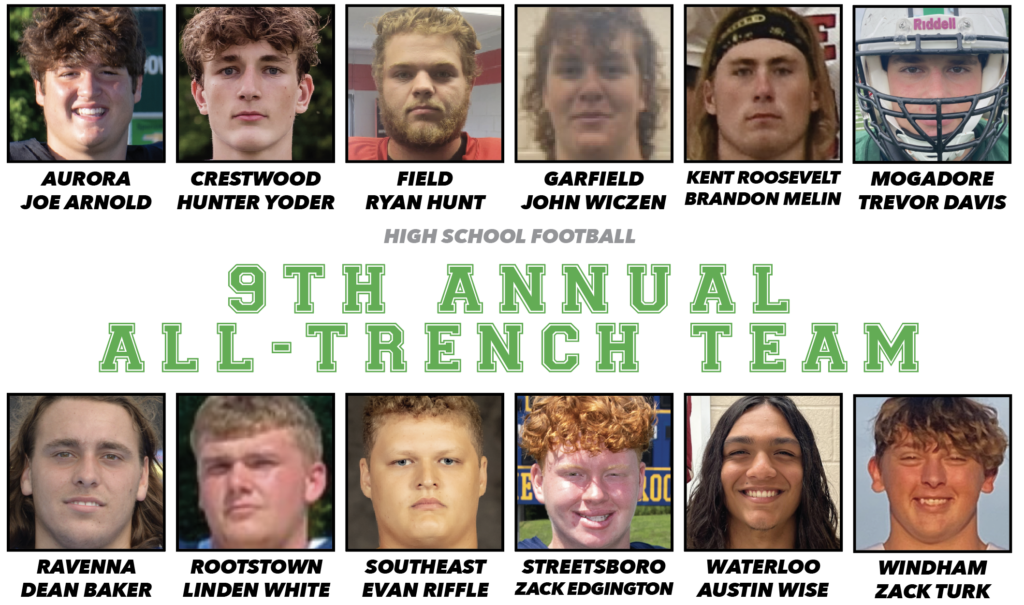 The ninth installment of Tom Nader’s annual All-Trench Team features 12 members — all of which are viewed as some of the most talented offensive linemen in Northeast Ohio.

It takes a special mindset to play on the offensive line.

By choosing to play on the line, players have already made a sacrifice.

They have given up the spotlight.

They have excused themselves from the record books.

They have removed any chance of being listed in the statistical leaders lists because an offensive lineman does not have an official statistic attached to its position.

What they have done, though, is sign up for whatever it takes to put the team first.

They are immediately connected to a team’s success and always deserve more appreciation than they get.

Most coaches know this, which is why they are always so quick to praise them in interviews or when discussing games amongst friends and colleagues.

Rightuflly so, coaches will oftentimes go out of their way to make sure the offensive line gets credit for a running back’s big night or the protection a quarterback received in order to throw for a lot of yards.

For at least one day out of the year, though, the spotlight is all theirs.

This feature is dedicated solely to the players in the trench, violently putting their bodies in harm’s way for the chance their team can gain that extra yard that could be the difference between a win and a loss.

It is not easy.

And it takes a special player to do it.

Players like those listed below, which I proudly present as the Class of 2022 for my 9th annual All-Trench Team.

Coach Bob Mihalik: “Joey is a three-year starter for us at offensive tackle. He also had played defensive line for use the past two years. He is a physical run-blocker, who has great agility for his size. He is a captain and leader, and he has multiple Division II offers and one FCS offer (Dayton).”

Coach Jack D’Amato: “Hunter is a three-year starter for us. He is not your typical offensive lineman, being very athletic and slim for his position. Hunter is a captain and the leader of the offensive line, alongside Gaige McIntyre. Hunter is willing and able to handle any issues that pop up in his position group. We are looking forward to a great year with Hunter at guard after making the move from tackle the past two seasons.”

Coach Matt Furino: “Ryan has increased his bench, squat and dead lift over 250 pounds from last year. He is a leader on the team and wants to play college football. He is a very good student and exemplifies everything I want in a Field football player. I also think he is one of the best offensive lineman I have seen in awhile. As tough as he is on the field, he is equally kind and generous. Ryan is a one of a kind.”

Coach Mike Moser: “Jon is a returning starter, who changed from center his sophomore season to tackle this year. He has fully dedicated himself to the weight room and is the anchor of our offensive line. Jon has quick feet and is constantly working on improving his work.”

Coach Alan Vanderink: “Brandon never comes off the field for us and for a lineman, that is very hard to do. It is a testament of his toughness and conditioning. He’s a great young man, with a caring heart and is a great student.”

Coach Matt Adorni: “Trevor is a two-year starter and an outstanding technical blocker. He makes the checks and adjustments at the line of scrimmage. Trevor has good feet and is a basketball player, too. He has a great off-season work ethic.”

Coach Joe Callihan: “Dean is the anchor of our lines and is a three-year starter. He brings experience and leadership to a unit that has quite a few new faces in starting roles. Dean works his tail off. This off-season, he lived in the weight room and came back bigger and stronger. We feel very fortunate to be able to coach Dean.”

Offensive Line Coach Mark Knopick: “Linden is a real student of the game. He always wants to know how to improve and takes coaching extremely well. He goes full-tilt on every player, whether it is practice or game.”

Coach Chris Knopick: “Linden has worked as hard as anyone in our weight room the last two years. He is the strongest member of our squad and has grown leaps and bounds as a young man and a leader. We are incredibly proud of him.”

Coach Patrick Youel: “Evan has grown tremendously as a player in his four-year career. He is our outside tackle in our single-wing offense, which is the most demanding position to play for us up front. He has accepted the challenge and is physical and very athletic. On defense, he is becoming a force and he sets the edge on the strong side of our defense. He is a three-sport athlete (football, basketball, baseball) and an Honor Roll student. He is a great football player, but more importantly, he is an incredible young man. It is a blessing to coach him.”

Coach Pete Thompson: “Z is a three-year starter at center and the unquestioned leader of our offensive line. He makes all of our line calls and sets our pass protections. He sets a good example for all of our younger linemen to follow.”

Coach Mike Devies: “Austin is one of the most explosive players I have ever coached. When he decides to turn it on, you don’t want to be in his path. He has dedicated an extraordinary amount of time to his off-season training in order to be one of the more dominant linemen in the area.”

Coach Jake Eye: “Zack has made the transition to guard from center last season. He has been a positive influence and leader to our young and upcoming trenchmen. He is always willing to sacrifice personal achievements for the good of his teammates. He is also a 4.0 student, enrolling in College Credit Plus courses this fall.”